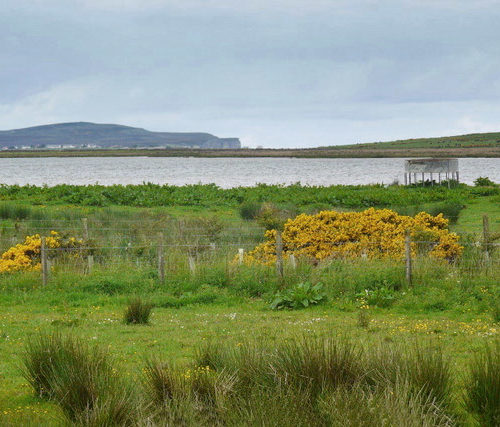 Loch Heilan is a shallow marl loch with an average depth of less than 1.5m. This is a challenging loch that will put an experienced angler to the test. It's home to some of the biggest trout caught in Caithness but be prepared to blank! In 2021 several fish of 19lb+ were landed and returned.

DFFA Members who wish to fish on Sundays may use the DFFA boat but must each purchase a bank fishing permit, available from Harper's or Hugo Ross.

A shallow loch with the reputation of holding very large, shy trout with shy being the operative word. In recent years an association has been set up with the aim of improving the fishery and towards this end a hatchery is now in operation. Prior to 1982, DFFA made numerous enquiries about a boat let to the Ministry of Agriculture and Fisheries who, along with Mr Pottinger, were the riparian owners. However it was not until 1982, when the land was sold to the tenants, that a let was acquired from the farmer at Lochend. The loch follows a fairly familiar pattern in that in some years it fishes well and produces fish that give the angler, lucky enough to hook one, a memorable experience. But these years are well interspersed with periods that can only be described as dismal, and it is this state of affairs that the new association hopes to remedy. Some DFFA members enjoy the occasional day on the loch and of course there are its devotees. There is always great interest shown when news of a big one breaks, giving rise to the old question as to whether it is right to change the character of a natural fishery time will tell.