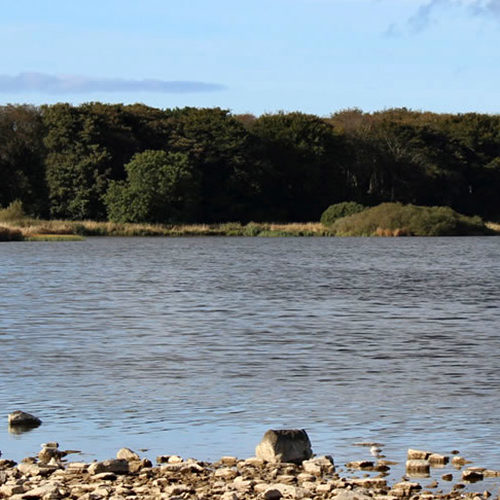 Due to a collapse of the temporary stem installed last year the water level of the loch is extremely low. There are currently no boat bookings available as we have been unable to launch them due to the lack of water.

It is unlikely the situation will be resolved quickly, it may take several months to rectify.

Loch Stemster is a relatively shallow loch that suffers from weed growth and discolours during periods of high wind. It's home to fish averaging just below a pound, but there are definitely some much bigger fish to be caught!

Stemster is also home to some beautiful wildlife that can keep an angler occupied during "one of those days."

Stemster lies some three miles to the north of Loch Watten and the two lochs are connected by a man made canal, about 300 yards long, cut on the east bank of the loch which runs into the north end of Loch Watten. The canal is a major spawning area with obvious implications to the fish population of Stemster. The loch is shallow and very dangerous to wade as it was formerly a marl quarry. In the 1960s there were two riparian owners Mrs. Grenfell, owner of Stemster Estate, and the Department of Agriculture and Fisheries. At that time DFFA had two boat lets from the Department. Three of the tenant farmers bought from the Department in 1980 and in 1983 the other three also acquired ownership. DFFA lets were continued with the farmers without difficulty. The farm on Stemster Estate was tenanted by David Coghill who took a great interest in the locjh and was greatly concerned about the flooding of the fields surrounding the loch due to the silting up of the canal, as were the new farmers/owners, who for years had put up with extensive flooding. During the winter of 1980 some had carried out drain clearing which lowered the level such that the loch was unfishable during the 1981 season. During the winter of 1981/1982 a contractor was hired to restore the depth of the canal using a mechanical digger but this operation was stopped about ten yards short of the loch side when it was realised that the new depth of the canal would allow the whole loch to drain into Loch Watten. Mr. Coghill contacted DFFA who agreed to participate in the construction of a stem across the canal, making water levels more controllable. After many months, agreement was reached among the various farmers and agencies about the position, final height, the method of construction and costing of the stem. This agreement was legally drawn up by a solicitor. On the third of September 1983 a group of DFFA members stood by watching a mechanical digger excavate the banks of the canal to allow them to fit the shuttering which they then filled with concrete and reinforcing bars. The shuttering was removed during the following week, exposing the new stem. He remainder of the debris at the loch outlet was then removed, allowing the the loch to run down to its winter level. The fitting and removal of the stem has since been carried out by DFFA, maintaining a water level suitable to all concerned.

Excellent relations had been built with the riparian owners during the above negotiations and it was on suggestions made by them that the idea of a Stemster loch association be formed. This was mutually agreed by all concerned parties i.e. owners and angling clubs (Ormlie Lodge Club, Royal British Legion and DFFA) Unfortunately, at the last moment, one of the owners withdrew his agreement, stating that he had sold his riparian rights to a time-share company called Salar Properties. This development effectively negated the idea of an association. This was to be regretted as there has been no improvement to facilities  except for repairs to the access road, funded by DFFA.